President Barack Obama heads to Saudi Arabia to bow down to new king... 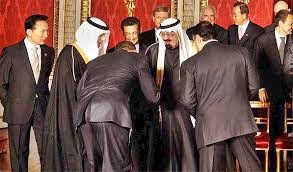 
(CNN)U.S. President Barack Obama will travel to Saudi Arabia on Tuesday in order to meet the newly appointed monarch, King Salman, and pay his respects to the family of the late King Abdullah, the White House said Saturday.

Vice President Joe Biden was originally set to have led a delegation to Saudi Arabia on Obama's behalf.
However, the schedule for the President's departure from India has been adjusted to allow Obama to stop in Riyadh himself on his way home, White House press secretary Josh Earnest said.