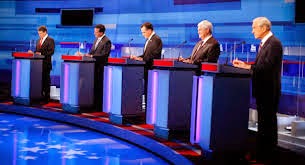 I would have given them all to Fox News.


Fox gets three (two on Fox News, one on Fox Business), CNN gets two, and CBS, NBC, ABC, and CNBC get one apiece. MSNBC gets some magic beans. Of note: The NBC debate will be co-sponsored by Telemundo and will be held in Florida in February 2016, shortly before the primary. If Jeb Bush is still in the race by then, that’s his time to shine. Lotttt of pressure on McConnell and Boehner, meanwhile, to do something on immigration reform by then so that the remaining GOP candidates have something to tout to Latino voters tuning in.
If this seems like conspicuously fewer debates than we’re used to after the last two presidential cycles, that’s because it is. And there’s a reason for it.