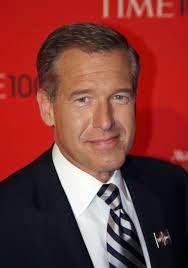 Sadly, we have come to expect this from the mainstream media.

NBC News anchor Brian Williams conceded on Wednesday that a story he had told about being under fire while covering the invasion of Iraq in 2003 was false.
Williams said he was not aboard a helicopter that was hit by enemy fire and forced down — a story he retold as recently as last week during a televised tribute to a retired soldier during a New York Rangers hockey game.
On “NBC Nightly News” Wednesday evening, Williams read a 50-second statement apologizing for his characterization of the episode.
“After a groundfire incident in the desert during the Iraq war invasion, I made a mistake in recalling the events of 12 years ago,” he said. “It did not take long to hear from some brave men and women in the air crews who were also in that desert. I want to apologize. I said I was traveling in an aircraft that was hit by [rocket-propelled grenade] fire. I was instead in a following aircraft. . . .