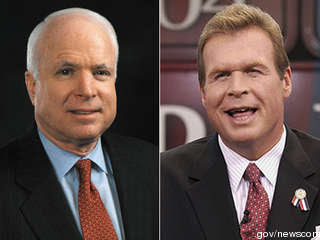 According to a Rasmussen Poll released late this week, J.D. Hayworth is gaining ground on incumbent Senator John McCain. Hayworth now polls at 42% and McCain draws 47% in the hotly contested Senate race. Any incumbent polling below 50% is considered very vulnerable.

Any incumbent who is earning less than 50% of the vote at this stage of the campaign is considered vulnerable....

It looks like McCain's ad ridiculing Hayworth as a "birther" and opponent of "horse marriage" is failing.
Posted by Bluegrass Pundit at 2:45:00 PM

I believe as we get further into this campaign the true colors of JD hayworth will be shown. Vote red white and blue Vote John McCain

Once those undecided realize what a corrupt big spender JD is, they will vote McCain