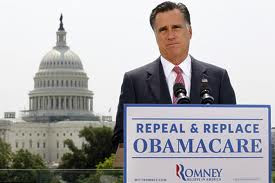 Unfortunately, this issue hasn't been played up in the general election by Mitt Romney due to his Romneycare in Massachusetts. However, Romney says he will repeal and replace Obamacare. I believe him.


One week before the election that will likely determine Obamacare’s fate, Americans support its repeal by an even wider margin than they did in the immediate aftermath of its highly unpopular passage.