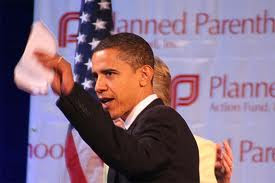 Romney is going to defund Planned Parenthood so fast they won't know what hit them.


Hey, America, do you know what you’re funding with government money when you give to “women’s health” via Planned Parenthood? You think I’m going to say abortion, don’t you? I don’t actually need to say that since you’d have to be brain dead not to know that part. How about to Barack Obama’s re-election? Wait you say! Not us! We give my money to Planned Parenthood because women’s health is important. Our tax dollars should support this crucial organization. Well, don’t look now, but you look like the silver-haired matron of the abortion industry, Cecile Richards.

Actually, government grants and funding to Planned Parenthood in the last reported year 2009-2010 was $487.4 million—and so far $12 million from the non-profit has been given to re-elect President Obama. That’s right. This organization that cares so much about your cervix cares more about it’s proverbial booty.