Obama calls Reverend Wright for 'Get Out The Vote" effort... 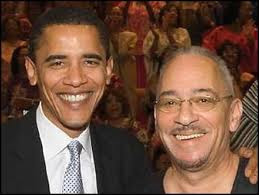 
As we roll into the final presidential debate, the polls show a very tight race. One thing they don’t show, however, is how race is a factor in the election.[...]

If Obama looks as if he’s going black, he could turn off white people. So he’s largely been lying low on the race issues – visibly pushing for the Latino vote, the gay vote, the women’s vote, but not the black vote.

But last weekend, he held a conference call with a collection of black preachers that included his old pastor, Jeremiah Wright. He wanted to talk to them about getting out the vote.
Keep reading…