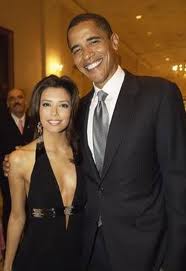 Eva Longoria is one of Obama's campaign co-chairs. She retweeted a vulgar message aimed at Mitt Romney. When you lose Alan Colmes, it's over. She should resign ASAP>


A top liberal commentator called for Eva Longoria’s resignation from President Obama’s reelection campaign following her retweet of a vulgar message aimed at Mitt Romney.
“I think she should resign from the campaign or be asked to resign as co-chair because I don’t think it reflects well on the campaign,” Alan Colmes said Thursday on Fox News Channel’s ‘American Live.’

“I have no idea why any woman/minority can vote for Romney. You have to be stupid to vote for such a racist/misogynistic tw*t,” the tweet, which Longoria retweeted, read.