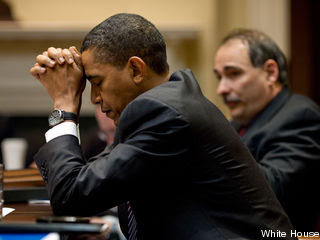 It's almost like there is an election coming up, the economy is bad and Obama needs a miracle...


President Barack Obama signaled if he wins a second term he would appoint a Secretary of Business to oversee newly-consolidated government agencies, including the Small Business Administration, and predicted “a war” will break out within the Republican Party after the Nov. 6 election.

“We should have one Secretary of Business, instead of nine different departments that are dealing with things like giving loans to SBA or helping companies with exports,” Mr. Obama said in an interview that aired Monday on MSNBC. “There should be a one-stop shop.”

Mr. Obama blamed Congress for such consolidation not happening during his first term because lawmakers have been “very protective about not giving up their jurisdiction over various pieces of government.” But the president has done little to push the idea himself.

Don't be fooled. Barack Obama is the most anti-business President of my lifetime.
Posted by Bluegrass Pundit at 7:15:00 PM