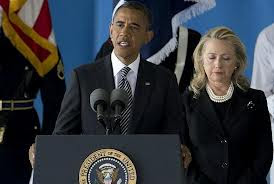 The Obama administration was deliberately deceiving the American public and Reuters has the emails to prove it...


(Reuters) – Officials at the White House and State Department were advised two hours after attackers assaulted the U.S. diplomatic mission in Benghazi, Libya, on September 11 that an Islamic militant group had claimed credit for the attack, official emails show.
The emails, obtained by Reuters from government sources not connected with U.S. spy agencies or the State Department and who requested anonymity, specifically mention that the Libyan group called Ansar al-Sharia had asserted responsibility for the attacks.
The brief emails also show how U.S. diplomats described the attack, even as it was still under way, to Washington.

U.S. Ambassador Christopher Stevens and three other Americans were killed in the Benghazi assault, which President Barack Obama and other U.S. officials ultimately acknowledged was a “terrorist” attack carried out by militants with suspected links to al Qaeda affiliates or sympathizers.

Administration spokesmen, including White House spokesman Jay Carney, citing an unclassified assessment prepared by the CIA, maintained for days that the attacks likely were a spontaneous protest against an anti-Muslim film.[...]