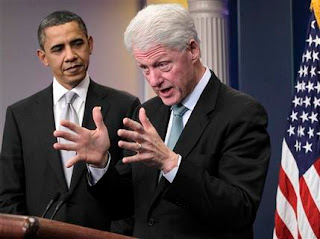 
When the histories of the 2012 campaign are written, much will be made of Bill Clinton’s re-emergence. His convention speech may well have marked the finest moment of President Obama’s re-election campaign, and his ads on the president’s behalf were memorable.

But there is one crucial way in which the 42nd president may not have served the 44th quite as well. In these final weeks before the election, Mr. Clinton’s expert advice about how to beat Mitt Romney is starting to look suspect.

You may recall that last spring, just after Mr. Romney locked up the Republican nomination, Mr. Obama’s team abruptly switched its strategy for how to define him. Up to then, the White House had been portraying Mr. Romney much as George W. Bush had gone after John Kerry in 2004 – as inauthentic and inconstant, a soulless climber who would say anything to get the job.

But it was Mr. Clinton who forcefully argued to Mr. Obama’s aides that the campaign had it wrong. The best way to go after Mr. Romney, the former president said, was to publicly grant that he was the “severe conservative” he claimed to be, and then hang that unpopular ideology around his neck.

The reason Obama is struggling is he has failed these last 4 years...
Posted by Bluegrass Pundit at 5:26:00 AM