Could Britain repel a UFO invasion? 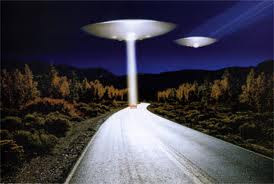 I doubt Britain could repel a Swiss invasion, much less a UFO invasion...

“We do have several prototype aircraft and drones and other weapons you won’t see on the news for another 10-15 years,” says Nick Pope. Pope ran the UFO project for the British Ministry of Defense, where he investigated UFO sightings, abductions and other unexplained phenomena. Pope says that only about 5 percent of the cases  “defied conventional explanation”, and that he “can’t rule out the possibility. There’s some intriguing evidence, but no hard proof.”

Yet Pope, who was a defense planner before he investigated UFOs, is confident that if aliens do come, Britain has enough high-tech weapons to stop an invasion, including the Taranis combat UAV. Now, with all due respect to Her Majesty’s brave armed forces, I’m not so sure that Britain could fend off the Cylons or the Klingons.

The military is being slashed to the point where the British Lion is becoming the Mouse that Roared. The Army is being cut by 20 percent to just 82,000 soldiers, less than half the size of the U.S Marine Corps alone. If the Bugs from Heinlein’s Starship Troopers show up (), force size could be an issue. Read more here...