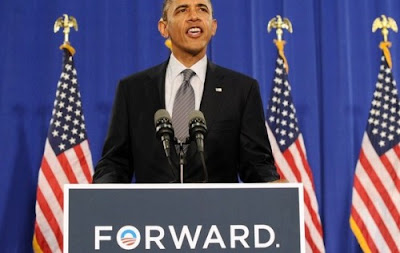 Please vote this embarrassment out of office next Tuesday.


President Obama may have suspended his campaign rallies due to Hurricane Sandy, but he managed to squeeze in his campaign slogan — intentionally or not — during a briefing Tuesday with federal emergency officials.

“The president made clear that he expects his team to remain focused as the immediate impacts of Hurricane Sandy continue and lean forward in their response,” the White House said in a statement about Mr. Obama’s video-teleconference that he conducted from the White House Situation Room. “Forward” is the slogan of his re-election campaign.

Mr. Obama canceled all campaign events on Monday, Tuesday and Wednesday as the storm lashed the East Coast, causing billions of dollars worth of destruction, resulting in several deaths and interrupting power for millions of residents.