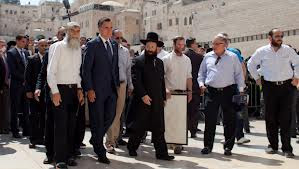 I hope American Jews are as wise...


Israeli Jews prefer Republican candidate Mitt Romney over US President Barack Obama by an almost 3:1 margin, according to a “Peace Index” poll conducted by the Israel Democracy Institute and Tel Aviv University that was released Sunday.

The polling figures stand in stark contrast to polls taken of American Jews, which show they prefer Obama by a similarly wide margin. An American Jewish Committee poll at the end of September showed US Jews favoring Obama over Romney 63%-27%.

The “Peace Index” poll also puts Israel at odds with most of the rest of the world, which – according to a BBC poll published last week of nearly 22,000 people in 21 countries — found Obama favored by an average of 50%, with only 9% for Romney. The Democrat was the preferred candidate in every country polled, except for Pakistan.

Asked “in terms of Israeli interests, who would be preferable to win the elections next month in the US,”  57.2% of Israeli Jews said Romney, while only 21.5% said Obama.
Among Israeli Arabs, the numbers were reversed, with 45% opting for Obama, and 15% for Romney.