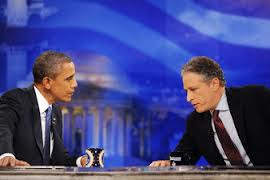 What Obama really meant to say was the deaths were "not optimal" for his re-election campaign.


The mother of an American diplomat killed during a terrorist raid on the U.S. consulate in Benghazi has hit out at Barack Obama for describing the attack as ‘not optimal’, saying: ‘My son is not very optimal – he is also very dead.’

During an interview shown on Comedy Central, Obama responded to a question about his administration’s confused communication after the assault by saying: ‘If four Americans get killed, it’s not optimal.’

Speaking exclusively to MailOnline today, Pat Smith, whose son Sean died in the raid, said: ‘It was a disrespectful thing to say and I don’t think it’s right.
‘How can you say somebody being killed is not very optimal? I don’t think the President has the right idea of the English language.’