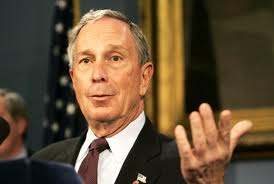 I thought it was caused buy too many big gulps. [snark] Bloomberg is a scientific idiot.


Hurricane Sandy may have seemed uniquely damaging to those caught in its path, but some have suggested that global warming could bring even more devastating storms to the U.S. in coming years.

New York governor Andrew Cuomo and mayor Michael Bloomberg both pointed to climate change as the culprit for Sandy’s ravages as they addressed the scale of the destruction on Tuesday morning.

And Cuomo even raised the possibility of a levee being built in New York Harbor, an unprecedented move to protect the 400-year-old city.

Many observers have pointed out that it is almost impossible to pinpoint climate change as the cause of specific weather events.

Moreover, the U.S. has long been subject to hurricanes and other damaging storms which have been just as violent as Sandy.

But the terrors wrought by Sandy, combined with last year’s destructive Hurricane Irene, have led New York’s top officials to raise the spectre of global warming.

Why does NYC keep this idiot as mayor? Oh I forgot-- it's NYC.