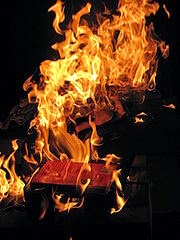 Perhaps this will get liberals attention. They seem to be ignoring the chopping off of heads and raping of women.


BAGHDAD (AP) — When Islamic State group militants invaded the Central Library of Mosul earlier this month, they were on a mission to destroy a familiar enemy: other people’s ideas.
Residents say the extremists smashed the locks that had protected the biggest repository of learning in the northern Iraq town, and loaded around 2,000 books — including children’s stories, poetry, philosophy and tomes on sports, health, culture and science — into six pickup trucks. They left only Islamic texts.
The rest?
“These books promote infidelity and call for disobeying Allah. So they will be burned,” a bearded militant in traditional Afghani two-piece clothing told residents, according to one man living nearby who spoke to The Associated Press. The man, who spoke on condition of anonymity because he feared retaliation, said the Islamic State group official made his impromptu address as others stuffed books into empty flour bags.
Keep on reading…