Has Senator Nelson Committed Political Suicide for Obama and Reid? 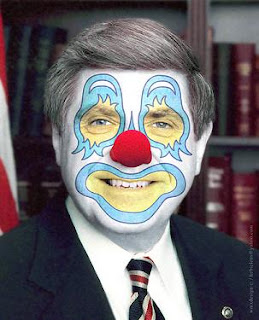 The willingness of democrats to commit political suicide to appease their party leaders never ceases to amaze me. It is much more understandable among the liberal 'true believers,' but even moderates like Sen. Ben Nelson (D-Neb.) are willing to throw themselves on their swords for Barack Obama, Harry Reid or Nancy Pelosi. When fifty-seven percent of voters nationwide oppose Harry Reid's health care bill (likely more in Nebraska), how can Senator Nelson rationalize voting against his constituents on such an important issue? Republicans aren't passing up this golden opportunity. They have launched a Give Ben The Boot website.

The chairman of Nebraska's Republican Party declared Nelson's decision to be the end of his political career in Nebraska, and within hours of Nelson's announcement, the state GOP launched a Web site, , to collect funds to oust the Democrat in the 2012 election.http://www.givebentheboot.com

I can't figure it out either. Nearest I can tell, once voted out, they sign on as lobbyist making even bigger bank than they do cashing in on being a politician.

BE CONFIDANT!
Most people who argue politics get angry because they really do not have a handle on their subject, though a strong feeling. It is easier to gain confidence than you think. Just look at the roots to understand the whole tree. Answers or, better, questions, flow easily when the roots are clear. There are only two sides to a political argument. One side says community interests are more important than are individual interests, and the reverse is the other side, as cited on claysamerica.com. Look at this site and take the ten simple steps to have a clear and confidant vision from which all issues are easily grasped and discussed. Claysamerica.com