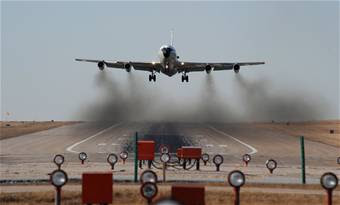 There is nothing in Washington to match raw naked politics. If you can't bribe them for votes, threaten them.

From the Weekly Standard:

While the Democrats appease Senator Lieberman, they still have to worry about other recalcitrant Democrats including Nebraska Senator Ben Nelson. Though Lieberman has been out front in the fight against the public option and the Medicare buy-in, Nelson was critical of both. Now that those provisions appear to have been stripped from the bill, Lieberman may get on board, but Nelson's demand that taxpayer money not be used to fund abortion has still not been met. According to a Senate aide, the White House is now threatening to put Nebraska's Offutt Air Force Base on the BRAC list if Nelson doesn't fall into line.

Political power is everything to these liberals and national security means nothing.

This is blatantly Un-American. If we had a real press, the dems would get called out on this one...