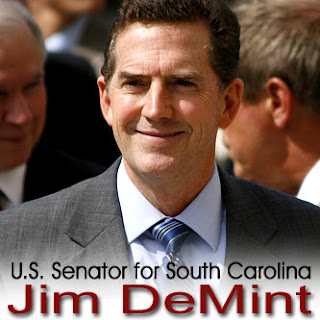 Sen. Jim DeMint (R., S.C.) is emerging as a true leader of the Republican Party. He is forcing a vote on an amendment to bar the practice of trading earmarks for vote. This would prevent the kind of backroom corruption we are seeing with votes for health care reform being sold by Senators such as Senator Ben Nelson and Senator Mary Landrieu. Unfortunately, if it passes, the amendment will only apply to future legislation, not the current health care bill.

In a surprise move, Sen. Jim DeMint (R., S.C.), chairman of the Senate Steering Committee, will seek a vote this afternoon on an amendment to prohibit the practice of trading votes for earmarks in the United States Senate. “Americans are disgusted by the earmarks, kickbacks, and backroom deals that have been used to buy votes for this health-care takeover,” says DeMint to NRO. “I hope we can put every senator on record on whether they support this legislative bribery, and we'll know who is part of the problem.”