Oh my! Rasmussen Poll Has Ben Nelson Down 30 Points to Heineman After Health-Care Reversal 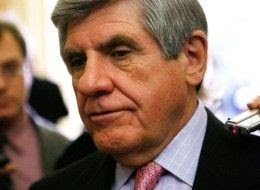 A new Rasmussen poll has Senator Ben Nelson down 30 points in a theoretical race against current Republican Governor Heineman. Nelson's health care vote seems to be the reason. Sixty-four percent (64%) of Nebraska voters oppose the health care legislation Ben Nelson voted for, including fifty-three percent (53%) who are strongly opposed. Only 17% of Nebraska voters approve of the deal Senator Ben Nelson made to sell his vote for a special Medicaid deal. An April 2006 poll by Survey USA found him to be the Senator with the highest popularity rating, 73%, among his own constituents. Senator Nelson has committed political suicide for Harry Reid and President Barack Obama.

If Governor Dave Heineman challenges Nelson for the Senate job, a new Rasmussen Reports telephone survey shows that Heineman would get 61% of the vote while Nelson would get just 30%.

Sometimes you just have to do the right thing, not the "politic" thing. Democrats did that with the Civil Rights Act and we're still not sorry.