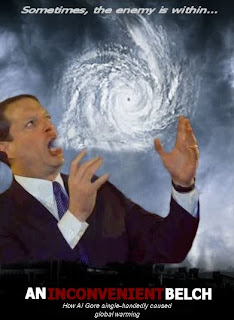 Al Gore got caught making things up. He claimed new research indicated the Arctic could be ice free in five to seven years. However, the climatologist, whose work Al Gore referenced, indicated Al Gore is a big fat liar.

In his speech, Mr Gore told the conference: "These figures are fresh. Some of the models suggest to Dr [Wieslav] Maslowski that there is a 75 per cent chance that the entire north polar ice cap, during the summer months, could be completely ice-free within five to seven years."

However, the climatologist whose work Mr Gore was relying upon dropped the former Vice-President in the water with an icy blast.

"It's unclear to me how this figure was arrived at," Dr Maslowski said. "I would never try to estimate likelihood at anything as exact as this."