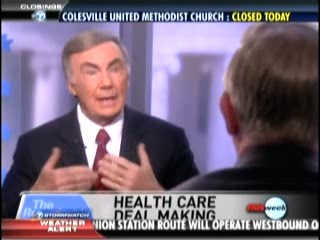 Sam Donaldson actually made George Stephanopoulos gasp when he admitted passing the current Democrats current version of Obamacare would "be a terrible mistake" for democrats. Transcript below:

GEORGE WILL: I believe the Republicans are. Let's look at some numbers. NBC-Wall Street Journal poll says 32 percent of the country, that's all that approves of this. Washington Post says 30 percent -- that's all -- only 30 percent of independents support. Arkansas, 32 percent. North Dakota, 28 percent in North Dakota support it. Sixty- seven percent of Nebraskans against it. Why else, George, did Senator Reid have to use the entire taxing and borrowing power of the federal government, plus a glorious absence of principle, to cobble together 60 votes, including, as we just heard here, 49 states shall have this burden, Nebraska won't? [...]

SAM DONALDSON: I think, George Will, you're right, if, in fact, the bill that I conceive is going to come out of the conference committee -- and I think will pass -- is in stone, and that is the healthcare bill from here on. But that's not...

STEPHANOPOULOS: Which part is he right about?

DONALDSON: Well, he's right that, in fact, it probably would be a terrible mistake.