Roland Burris Threatens To Vote No On Obamacare 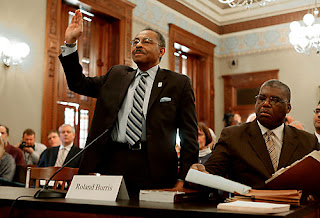 Wouldn't it be ironical if the Senator appointed to Obama's old Senate seat, under a cloud of scandal, was the vote that keeps Obamacare from passing? Roland Burris is saying he will not vote for the Senate bill unless it contains a public option.

On a day when Democrats emerged triumphantly from a meeting with President Barack Obama appearing to have won the vote of Joe Lieberman for their pro-abortion health care bill, they may not be ready to celebrate yet. The Lieberman vote appeared to allow Democrats and Obama to secure 59 votes.

The only holdout left appeared to be pro-life Sen. Ben Nelson of Nebraska who says he won't vote for the bill because it funds abortions.

Email ThisBlogThis!Share to TwitterShare to FacebookShare to Pinterest
Labels: Burris, no, obamacare, vote

Senator Roland Burris is racing to outdo himself before the year is up. Chicago's new poet laureate isn't done yet.