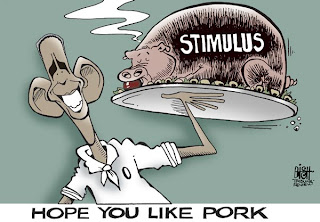 Apparently, stimulus funds are being doled out without regard for need. The most money isn't going to poor districts that have high unemployment. Actually, the most important statistics for getting stimulus money seem to be living in a Democratic district that has a higher than average income level. Democrats crafted the 'Stimulus Bill' with only three republican votes. Republicans claimed the bill was mostly pork for democrats. This new study confirms they were correct.

Democratic districts have received nearly twice as much stimulus money as Republican districts and the cash has been awarded without regard to how badly an area was suffering from job losses, according to a new study.

The Mercatus Center at George Mason University reviewed the distribution of $157 billion in stimulus dollars based on publicly available reports and found that there was "no statistical correlation" between the amount of money a district got and its income or unemployment rate.