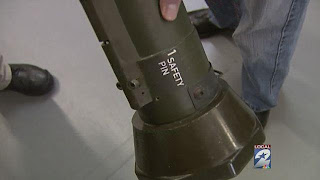 This may be the most insane story of 2009. Police get called to a disturbance. They find a rocket launcher and Jihadist writings. The police failed to file charges for the rocket launcher.

When officers went inside, they found something that made them concerned enough to call the bomb squad.

They found an AT-4 shoulder-mounted rocket launcher. It can shoot a missile nearly 1,000 feet through buildings and tanks.