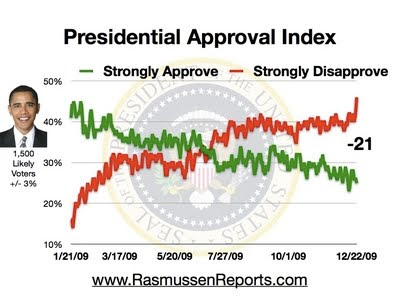 According to Rasmussen, Fifty-six percent (56%) of voters now disapprove of President Obama's job performance. An astounding forty-six percent (46%) strongly disapprove. This is a six point jump in the strong disapproval number since it became obvious the democrats are going to ram their version of health care reform down American's throats. President Obama's Presidential Approval Index rating(see chart) of -21 is the lowest ever recorded for the Obama Presidency.