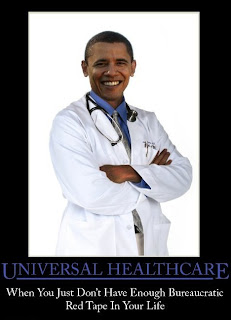 Democrats claim people will like their health care reform after they understand the details. A new poll by Rasmussen indicates voters already know most of the bills provisions and fifty-eight percent (58%) are still opposed to it.

Many have questioned whether those who favor or oppose the health care plan in Congress really know what’s in it. A new Rasmussen Reports national telephone survey suggests that they have a decent understanding of the bill and that voter attitudes towards the legislation have hardened.

To What Are You Loyal?
by Lyndon H. LaRouche, Jr.
December 31, 2009
With the crafting of the Hitler-like “IMAB” conditionality in the Senate health-care bill, President Barack Obama’s faction within the Democratic Party has gone over, not only, to the side of the enemies of our Federal Constitution’s most fundamental principle, but, by lending aid to such implicitly treasonous action, has given support to that which is fairly described as the principle of Satanic evil expressed in the usurpatious, and, frankly pro-satanic policies of Britain’s former Prime Minister Tony Blair who has led in reviving Adolf Hitler’s war-time health-care policies, with the active prompting of him by the leading figures of the present British royal house.
Under these conditions, when our republic is under a presently existential threat to its continued moral, and also its physical existence as a free republic, our patriots must make a principled break with the presently incumbent British monarchy. Patriotic Democrats, in or out of the Federal Congress, will prove themselves patriots by breaking themselves free of the control recently exerted by that corrupted administration and its leading accomplices within the Presidency and the Congress.
They, for the very soul’s sake, must join with other patriots in summarily ridding this nation of that evil which is represented by those who have acted to support the frankly Satanic evil which the President has come to represent through policies of practice such as the present, implicitly pro-Satanic, version of the draft health-care legislation introduced under the present Senate leader.
By his actions in this matter, especially those offenses represented by his so-called “health-care reforms,” this President and those elements of his Administration and Party which have crafted the hideous, Hitler-like policies represented by the content of the present Senate draft of that bill, have made themselves complicit, whether wittingly or not, with a policy which is tantamount to that of the Nuremberg crimes traced to Hitler’s health-care measures introduced as those "Nazi Tiergarten 4" health-care policy under the war-time Nazi law which led to the great genocide for which leading physicians and others were condemned to death in the so-called “Nuremberg” proceedings.
We must join with those nations of the world which had led in defeating the evil scheme which the present British imperial monarchy had brought to the recent Copenhagen “summit.” We must align ourselves with those nations which share the principle which was defended against the evil, long associated with her consort, the Duke of Edinburgh, the which Her Majesty Queen Elizabeth II, had assigned to that Copenhagen “summit,” the Duke’s intention to reduce a world population of a currently estimated 6.7 billions living human souls, to two or less, that at a rapid rate.
We would hope that our sane and honorable “cousins” within the population of the United Kingdom would lend support to what should be, morally, our common cause against the monstrously great evil which the recent Senate action in support of President Obama’s and former Prime Minister Tony Blair’s evil scheme represents as a currently immediate, implicitly pro-Satanic, Hitler-like, threat to all humanity.