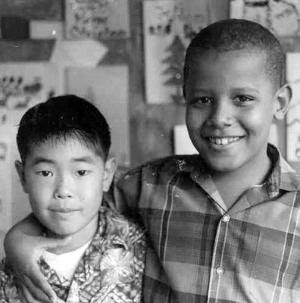 A California chiropractor, Scott Inoue, is circulating a photo allegedly showing him and Barack Obama that was taken in 1969 while they were in the third-grade in Hawaii at Noelani Elementary School. The picture is was labeled "Scott & Barry 3rd grade 1969" by Inoue's mother. Strangely, Barry Soetoro (Barack Obama) is not known to have ever attended Noelani Elementary School. According to many well publicized biographies, Young Obama was in Indonesia from 1967 through 1971. Barry is also a head taller than his classmate. Mr. Inoue sent an enlarged copy to President Obama. He signed it and returned it with a thank you note. Hmm...

The picture -- with the words "Scott & Barry 3rd grade 1969" scribbled at the bottom by Inoue's mother -- shows Obama almost a head taller than Inoue, with their arms around each other. Against a background of Christmas tree drawings, Obama is smiling more broadly than the shyer-looking Inoue.

"He was a lot taller than me; he towered above most of us....

Barry looks like he is about to choke the smaller kid. Maybe he made fun of the big ears.

Since Barry hasn't released any of his personal records who knows...

It certainly looks like him, so I guess the photograph proves he spent at least part of his 3rd grade year in Hawaii.