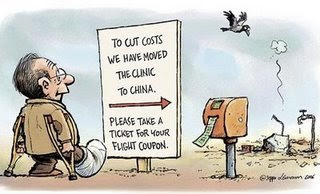 Does anyone besides me see the irony here? Democrats claim their health care reform is going to lower costs and deduce the deficit. The truth is the bill will raise costs for many people and increase the deficit by $300 billion. The U.S. is going to need that higher debt ceiling level.

WASHINGTON -- The Senate passed a health insurance overhaul on Thursday morning, 60-39, as both Democrats and Republicans held unified in their positions on the massive bill that mandates coverage for about 9 percent of the U.S. population.

All 58 Democrats and two independents supported the $871 billion, 10-year package that aims to cover about 30 million Americans. Thirty-nine of 40 Republicans rejected the bill. Kentucky Sen. Jim Bunning, who is retiring at the end of this Congress, did not vote.

Call or visit your Senators and Congressman during the break. This takeover of one sixth of the U.S. economy can still be stopped. After the House and Senate reconcile their versions, there will be another vote.
Posted by Bluegrass Pundit at 8:20:00 AM