Is the Iranian Regime Ready to Fall?

There are reports the Iranian regime is preparing to flee Iran to Russia. Planet Iran released a letter published on Iranian websites that claims Ayatollah Khamenei is planning a possible escape to Russia. 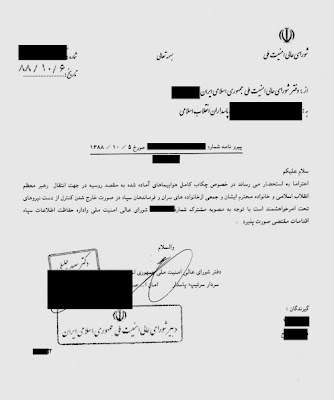 Iran Global website has exposed a document that discloses information on Khamenei and various authorities of the regime’s possible escape to Russia.

Re: Response to a letter number [redacted] written on the 5th of Dey (December 26th).

With respect, we would like to inform you of the inspection, check up and preparation of the aircraft, destination Russia, for the purpose of transporting the Supreme Leader, his esteemed family and various officials of the Revolutionary Guards. Should the commanding forces lose control, direct your attention to the attached permit, number [redacted] of the National Security Agency and the Bureau of Revolutionary Guard’s Intelligence Security in order for the necessary steps to be taken.

Hat tip Gateway Pundit.
Posted by Bluegrass Pundit at 10:29:00 AM