Another Blue Dog Democrat in Trouble at the Polls 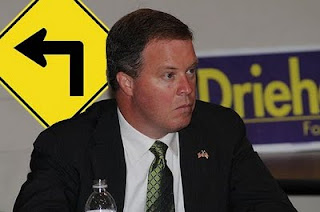 Rep. Steve Driehaus (D-Ohio) ran as a “raging moderate” in 2008. However, Politico describes Rep. Driehaus as "a reliable backer of party leadership." This alleged blue dog has been revealed to be a Nancy Pelosi lap dog. Voters are not pleased. Driehaus is down 17 point in the latest survey to the same man he defeated in 2008.

Another day, another SurveyUSA poll showing a Democratic member of the House down 17 points to his Republican challenger.

Yesterday, it was Rep. Vic Snyder (D-Ark.), who announced his retirement on the same day the alarming poll was released. This time, the latest SurveyUSA poll shows Rep. Steve Driehaus (D-Ohio), a freshman Democrat who represents the Cincinnati area, losing to former Republican congressman Steve Chabot, 56 to 39 percent.

Another one set to bite the dust

Show me a blue dog and I'll show you a Pelosi-Obama liberal agenda enabler.