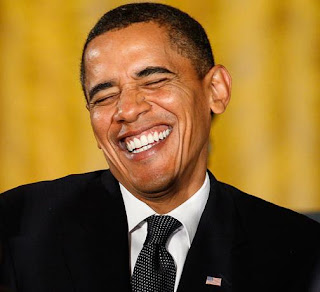 I was fortunate and only had to take a pay cut last year. Many Americans weren't as lucky. They lost their jobs. Unemployment is 10% and underemployment is much higher. Does President Obama understand our pain? No. Obama fails to gets it as much as Nero did when he played the fiddle while Rome burned.

Just in case any of you were worried that Dear Leader might be heading for premature burnout due to his strenuous posturing, fear not: for President Obama has chosen the much-underrated strategy of revitalizing himself through constant partying.

While the great unwashed continues to suffer, Carter Clews reports that the Obamas have,

hosted no less than 170 parties and social events through December 3 of 2009. And that does not even include the 17 parties and 11 open houses – feting more than 50,000 guests – ABC News reported the Obamas hosted throughout the Holiday Season.

Although Carter calculates that this equates to staging “one gala White House event every three days throughout the first year of the Obama Administration”, by my arithmetic it’s more like a par-tay every other day during Year One.

The White House Social Secretary, Desiree Rogers (whom Newsweek nauseatingly dubbed “The Busiest Woman in Washington“), is quoted as saying that the Obamas want to “replicate the same kind of environment they had in Chicago.”

In more ways than you know, Desiree.