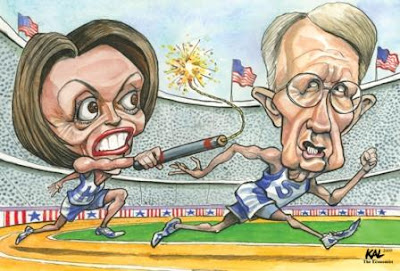 Harry Reid and Nancy Pelosi are reportedly huddling this weekend and trying to figure out how to finish the massive takeover of America's health care they have been working on for most of this year. This is in spite of this survey indicating Sixty-one percent (61%) of U.S. voters say Congress should drop health care reform and focus on improving the economy and creating jobs.

Struggling to salvage health reform, Senate Majority Leader Harry Reid and House Speaker Nancy Pelosi have begun considering a list of changes to the Senate bill in hopes of making it acceptable to liberal House members, according to sources familiar with the situation.

One problem is they believe that in order to improve something that government must be involved. This is opposite of the truth. They need to pull government out of the economy and healthcare and then they will see improvement. Currently, they're causing the very problems they are solving and that's getting us no where.

Denial is a river in bumf*** Egypt, which is where these commies will eventually drown...