NBC's David Gregory Bashes Republicans As 'The Party of No' 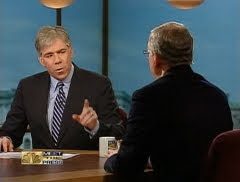 After his largely friendly discussion with senior White House adviser Valerie Jarrett, the "Meet the Press" host abruptly changed his tone and manner with the very first question to McConnell, "Is there one Republican who will support any Democratic healthcare initiative?"

Is this supposed to be an insult to Republicans?

Yes, we are the Party of No, you idiot.

Seems like people are voting for the party of no quite often these days. If the Republican Party is the party of no, then the Democratic Party must be the deaf party because they can't seem to hear what the people really want.