President Obama is concerned about special interest money in elections after after the Supreme Court ruling striking down much of McCain-Feingold campaign finance reform.

"With its ruling today, the Supreme Court has given a green light to a new stampede of special interest money in our politics. It is a major victory for big oil, Wall Street banks, health insurance companies and the other powerful interests that marshal their power every day in Washington to drown out the voices of everyday 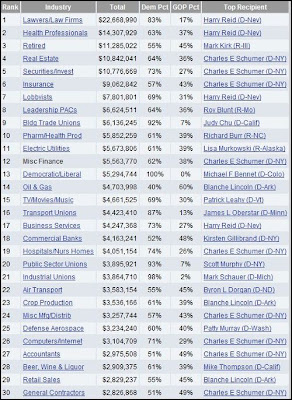 Sorry, I have to side with President Obama and what Bill O'Reilly said tonight about McCain-Feingold bill. O'Reilly said "If we allow corporations to buy ads during an election, they can essentially buy the Presidency"

I think setting limitations on the amount corporations can use in elections is a way to keep special interest groups out of government.

I agree with Obama, O'Reilly, McCain and Feingold. Free speech is the right of the people, not Corporations, Unions or Associations (AARP).