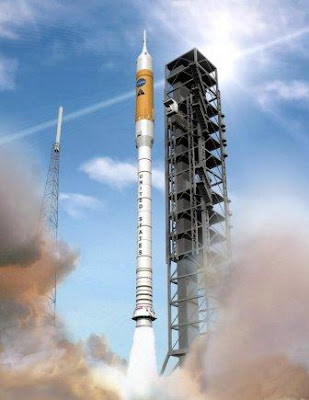 An artist's concept image shows the Ares I crew launch vehicle on the launch pad at NASA's Kennedy Space Center, Florida. The upper stage is the wide part of the rocket near the top. Credit: NASA/MSFC

President Obama will not fund The Constellation program in his next budget. The Ares I and Ares V launch vehicles will be canceled. There will not be any money for a new lunar lander either. This means our planned return to the moon has been indefinitely delayed. Also, we will have to depend on the Russians to give us a ride to the International Space Station for the indefinite future after shuttles are grounded at the end of 2010. President Obama certainly doesn't have John F. Kennedy's vision when it comes to advancing the exploration of space. Manned space flight has been the driving force for NASA for most of their history. When we can only go to the ISS occasionally if the Russians give us a ride, public enthusiasm for other NASA funding will surely wane. This is the beginning of a slow death for NASA and space exploration.

NASA's plans to return astronauts to the moon are dead. So are the rockets being designed to take them there, if President Obama gets his way....

"We certainly don't need to go back to the moon," one administration official said.

Obama found 80 billion to save the UAW.

This is the beginning of a slow death for NASA and space exploration.

Finally someone who gets it. The end of the the American spirit of discovery.