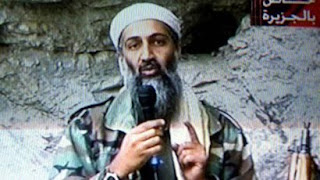 In a new tape played in part by Al-Jazeera television, Osama Bin Laden blamed America for global warming and urged the world to get out of the dollar. I wonder if anthropogenic global warming believers will embrace their new team member.

CAIRO — Al Qaeda leader Usama bin Laden has called for the world to boycott American goods and the U.S. dollar, blaming the United States and other industrialized countries for global warming, according to a new audiotape released Friday.