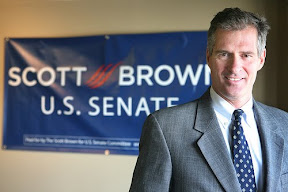 A Suffolk University poll released today has Scott Brown defeating Martha Coakley by double digits. This is a surge from his numbers last week.

A poll released a day before the special Senate race shows Senator Scott Brown surging to a double-digit lead over Attorney General Martha Coakley in the race for the open Massachusetts Senate seat.

I am glad Martha Coakley is going to lose, after the Amirault Case and the protecting of real child molesters, she should be in prison. She is pure evil.

I don't know Scott Brown, I have zero respect for people who take their clothes off the camera but the other candidate is evil.