Another House Democrat Bites the Dust 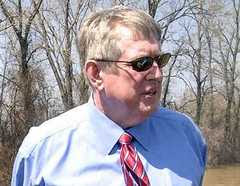 The latest democrat to abandon ship is Rep. Marion Berry (D-AK). Rep. Berry is from a district John McCain won in 2008.

Arkansas Rep. Marion Berry is expected to announce his retirement tomorrow morning, according to three sources briefed on the decision.

Berry will become the sixth Democrat in a competitive seat to leave in the last two months but the first to announce his retirement since the party's special election loss in Massachusetts last Tuesday.

Democrats will be quick to point out 14 Republicans have announced plans to retire. The difference is most of these republicans are from districts that are considered safe.
Posted by Bluegrass Pundit at 5:54:00 AM

There are 120 Liberal controlled seats with NO one running against them!!

Serve our country or find a patriot who will!