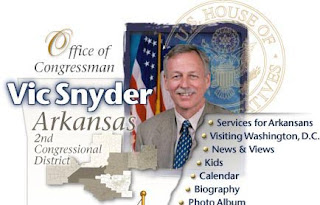 This time it is U.S. Rep. Vic Snyder (D-AR), a seven-term U.S. Congressman representing Arkansas’ 2nd Congressional District. The reason is, allegedly, that he wants to spend more time with his family, but a SurveyUSA poll released Friday showed him trailing his Republican challenger Tim Griffin by 17 points.