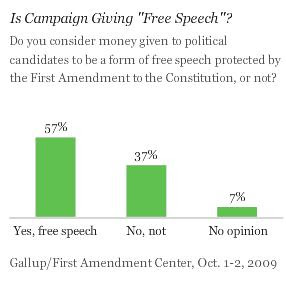 PRINCETON, NJ -- Americans' broad views about corporate spending in elections generally accord with the Supreme Court's decision Thursday that abolished some decades-old restrictions on corporate political activity. Fifty-seven percent of Americans consider campaign donations to be a protected form of free speech, and 55% say corporate and union donations should be treated the same way under the law as donations from individuals are. At the same time, the majority think it is more important to limit campaign donations than to protect this free-speech right.

Donations is free speech where individuals are concerned but the 1st Amendment was not addressing corporations in regards to campaign donations.
Special interest groups should not decide who is to become President because there is a conflict of interest whereby a President is "bought" and pressured to vote in a way that benefits them.