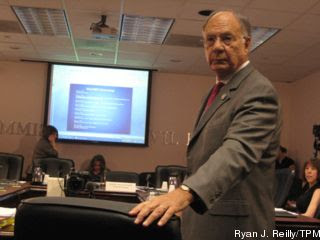 Former DOJ Prosecutor, J. Christian Adams, testified to the U.S. Commission on Civil Rights, in July, that attorneys in the civil rights division were instructed to not prosecute black on white crime. A prime example was Holder's DOJ dismissal of the New Black Panther voter intimidation case. Now, Christopher Coates, former voting chief for the department’s Civil Rights Division, has confirmed Adams' allegations. He called the dismissal of New Black Panther case a “Travesty of Justice.”

Christopher Coates, former voting chief for the department’s Civil Rights Division, spoke under oath Friday morning before the U.S. Commission on Civil Rights, in a long-awaited appearance that had been stonewalled by the Justice Department for nearly a year.

Coates discussed in depth the DOJ’s decision to dismiss intimidation charges against New Black Panther members who were videotaped outside a Philadelphia polling place in 2008 dressed in military-style uniforms — one was brandishing a nightstick — and allegedly hurling racial slurs...

Nearly three months later, Coates backed up Adams’ claims. In lengthy and detailed testimony, he said the department cultivates a “hostile atmosphere” against “race-neutral enforcement” of the Voting Rights Act.