Sen. Lisa Murkowski (RINO-Alaska) to be stripped of Seniority by GOP Senators (Updated) 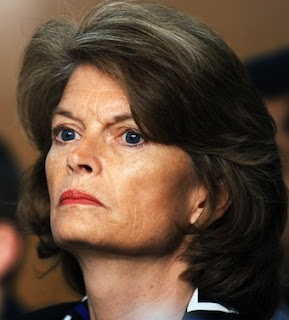 In the wake of her decision to ignore Republican primary voters and run in the general election as a write-in candidate, Sen. Lisa Murkowski will have her seniority position on the Senate Energy Committee stripped by her GOP colleagues. I guess tarring, feathering and riding her out of town on a rail wasn't a serious option.

Senate Republicans just said they will move tomorrow to strip Alaska Sen. Lisa Murkowski, R-Alaska, from her post as ranking Republican on the Senate Energy Committee.

Another Republican came out of the Senate GOP lunch and told CNN it was clear Murkowski has virtually no support among her colleagues anymore. That senator spoke on condition of anonymity, in order to speak freely about a private meeting.

Update: GOP Senators decide to not strip Murkowski. She resigns from leadership position.
Posted by Bluegrass Pundit at 5:55:00 AM

What the heck is this all about? What is she thinking?