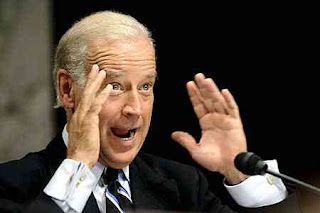 President Obama has been in denial of the massive Tea Party movement sweeping this country. Obama even used the derogatory "teabaggers" term earlier this year. In April, he skipped town to avoid the large Tea Party rally in Washington DC. Obama ignored the hundreds of thousands of people Glenn Beck brought to Washington last month. He seems to be in complete denial of the sea of change that has washed over the political landscape outside of the beltway in the last eighteen months. However, VP Joe Biden is starting to open his eyes.

On the heels of Christine O’Donnell’s primary win in Delaware Tuesday, Vice President Biden tonight had a straightforward message to progressives: “Get in gear, man.”

With the midterm elections quickly approaching, Biden said the Democratic Party’s base needs to take seriously the challenge from tea party candidates and their supporters.

“I think it’s time for our base to say, ‘Hey man, take a look. This opposition is for real,’” he said.