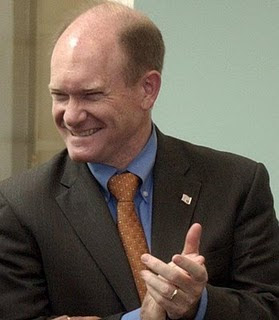 Coons inherited a surplus. Celebrating victory on election night in 2004, he said his “top priority would be to continue balancing the budget without increasing property taxes,” according to an account in the local News Journal. Yet in 2006, he pushed through a 5 percent increase in property taxes. In 2007, he raised property taxes 17.5 percent. In 2009, he raised them another 25 percent.

Coons wanted to raise other taxes, too. He proposed a hotel tax, a tax on paramedic services, even a tax on people who call 911 from cell phones.

Plus he appears to be wearing his flag pin upside-down.

The tax code has nothing to do with emergency services, and never will. You are full of it.