California gubernatorial candidate Meg Whitman today found herself battling allegations that she knowingly employed an undocumented immigrant housekeeper, failed to pay a portion of her wages and then fired her in an act of political damage control.

Unfortunately for them, Whitman keeps good records and has released documentation proving the maid falsified her application.

The documents, which Whitman claims Nicky filled out and signed back in 2000 during her application for employment, appear to show that the maid stated under the penalty of perjury that she was a “lawful permanent resident” of the United States.

Whitman also claims Nicky provided her with a social security card and valid California Driver’s License with her employment application … which Meg kept and has now handed over to TMZ. 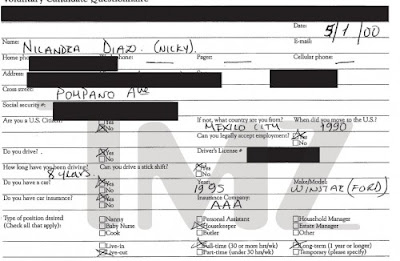 Meg, Meg, Meg, where do I start, you have reportedly spent $119 million of your own money to get elected Governor but you personally went out, interviewed and hire yourself a 15 hour a week maid/ housekeeper instead of hiring a service like Maid Brigade, Merry Maids, ServiceMaster Clean, talk about being a cheap bastard. But it does not stop there, after she worked for you for nine years you would not help her in getting legalized? Wow, what a WITCH, of course I meant it with a “B”.

But your comments on holding employers accountable for hiring undocumented workers real takes the cake, I assume you exempt yourself and your husband, or will you be turning yourself in.

Meg you think you can buy the election, but what puzzles many is if you real cared and loved California then why not do your civic duty and vote, seems more rhetoric than anything else. In good times we might give you a try but not in our disaster mode that we find ourselves in after that so-called outsider Independent Republican, named Arnold Schwarzenegger (sold to us by radio personalities John and Ken), ruined our state, yah we will trust another one of you liars, think not. You can’t buy everything! What a waste of money!

"Meg, Meg, Meg, where do I start, you have reportedly spent $119 million of your own money to get elected Governor but you personally went out, interviewed and hire yourself a 15 hour a week maid/ housekeeper instead of hiring a service like Maid Brigade, Merry Maids, ServiceMaster Clean, talk about being a cheap bastard."

A cheap bastard? Whitman paid the maid a about $25 an hour. Aso, she hired the maid through an agency.
http://latimesblogs.latimes.com/california-politics/2010/09/allred-pledges-to-provide-proof-that-whitman-knew-maid-was-illegal-in-2003-whitman-says-she-never-sa.html

BTW, I have seen this same comment on other blogs. This may be a Brown campaign operative spamming the Internet.

Cheap!! She paid her maid $23/hour!! That's probably more than you ever paid your illegal maid or gardener you crazy spendthrift you.

Wise up, this is just another Jerry Brown October surprise and it is sprung by the all time media whore Gloria Allred, who calls herself a lawyer, but hasn't been in court since the Eisenhower Administration, when she was a mere lass of 40 or so.

Nice try guys, but when this all clears up, it will probably give Meg a 5 percent boost in the polls. Illegal is illegal. You can't believe someone who has spent her whole working life lying to everybody about her legal status. Liars just lie. That's just the way it is, and nothing Gloria Allred says will change that.

No matter what her crimes, Nicky, the housekeeper is not the one who's running for governor. She barely speaks English, and told Meg "she could not leave the country" to visit her family in Mexico. Whitman received several letters from the SSA, yet still never put two and two together. Meg wants to be governor of CA and penalize employers of illegal aliens. But she herself never put action behind her words, because she "didn't want to make an example" of her employee. Huh?
Even Whitman's former boss, ebay founder Pierre Omidyar will not endorse her. Stick a fork in her, she's done.

The Republicans are so funny, when the economy is good you say let’s all celebrate “Cinco de Mayo, my brothers” but when the economy is down “it’s all your fault, you damn immigrant”. When most Americans (with Latin America roots) go to the polls this November we will remember that the GOP has gone on a nationwide rant in proposing and passing several anti-immigration legislation (that our US Courts continue to strike down) and have continue to blame the immigrant for the flat economy or worse. We will remember who stands with us and who stands against us, so trying to stop it now is somewhat funny, but go ahead, you will not change our minds.

Plus the more radical of the GOP are now attacking our Constitution and our Bill of Rights, in their crazy notion of wanting to take away rights that all of us take for granted in their misguided attempt to garner some much needed votes, they really are fools, and leading the GOP towards obscurity because they are no longer a party of ideas, just of empty suits. Your hate made you do it, in November; you will reap what you have sown. I wonder what Abraham Lincoln would say about todays GOP, he unlike the current GOP was a man of ideas.

I bet there is quit pro quo. Nikki knows she will be deported and she will be paid huge sum when she returns to Mexico.