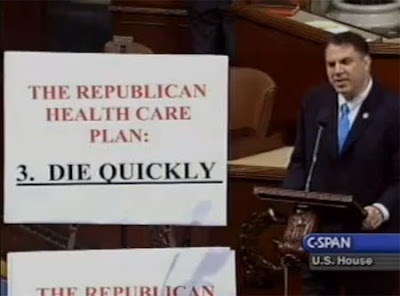 Rep. Alan Grayson has questioned the patriotism of his opponent Republican Daniel Webster and compared him to the Taliban. A new poll of likely voters commissioned by Sunshine State News has found Daniel Webster has jumped to a 7-point lead over Grayson.

In one of the most closely watched U.S. House races in the nation, Republican Daniel Webster now holds a 7-point lead over Democratic Rep. Alan Grayson in Central Florida's 8th Congressional District, according to a new Sunshine State News Poll.

Oh November 2, sweet, sweet day. Goodbye, Mr. Grayson. You have been an embarrassment to Floridians.

November 2. Mr. Grayson did let the door hit your behind on the way out.