Obama to Democrats and Progressives: Stop Being Irresponsible 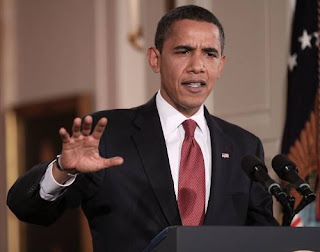 One closing remark that I want to make: It is inexcusable for any Democrat or progressive right now to stand on the sidelines in this midterm election. There may be complaints about us not having gotten certain things done, not fast enough, making certain legislative compromises. But right now, we’ve got a choice between a Republican Party that has moved to the right of George Bush and is looking to lock in the same policies that got us into these disasters in the first place, versus an administration that, with some admitted warts, has been the most successful administration in a generation in moving progressive agendas forward.

The idea that we’ve got a lack of enthusiasm in the Democratic base, that people are sitting on their hands complaining, is just irresponsible.

The head begins eating the body...
Posted by Bluegrass Pundit at 6:36:00 PM