Who is Chris Coons? 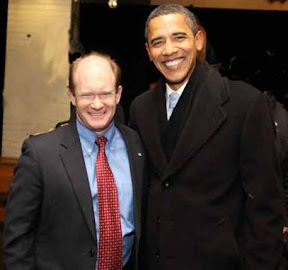 The Delaware Senate race has stirred national interest. The mainstream media has often attacked covered Christine O'Donnell. Of course, O'Donnell's coverage has been almost entirely negative. Very little other than campaign sound bites have been reported about her opponent. Just who is Cris Coons? Chris Coons comes from a privileged background and has a law degree from Yale Law School and a Master's in Ethics from Yale Divinity School. Coons studied in Kenya as a student, and after returning, wrote a paper claiming he was a "bearded Marxist." It is unclear if Coons is till a Marxist, but he is clearly to the political left of even President Obama. Senate Majority Leader Harry Reid has called Chris Coons "my pet." He currently is the County Executive of New Castle County in Delaware. On the surface, he seems like a pleasant man, but one local liberal has accused him of "evil" behavior and selective enforcement of laws for political purposes. Coons website claims he successfully guided New Castle County through the current economic downturn. However, many claim he has nearly bankrupted the County. He increased spending by 10% and hiked property taxes three times; one was a whopping 25% increase. Chris Coons personal finances are a little murky. In the past, he has been accused by some of violating campaign finance reporting law. According to the deed to his house, he bought a two story Colonial on a half acre for $10.It is unlikely Coons actually bought the house at that price, but it is unclear why he would hide the real selling price. Perhaps he was trying to avoid some of those 'sky high' property tax hikes he passed.
Posted by Bluegrass Pundit at 5:34:00 AM

Coons may have lost the beard, but I suspect his ideology is the same.